The single currency continues to move lower after the German Constitutional Court ruled on Tuesday that the ECB’s bond buying scheme (QE) was not balanced and gave the central bank three months to prove that the QE program was ‘proportionate’ otherwise the Bundesbank may pull out of the program. Subsequent commentary from the President of the Bundesbank Jens Weidmann that he would support the ECB in their efforts to meet this requirement calmed the situation but if the market sees any fractures within the EU, the Euro will come under increasing pressure.
Tuesday’s EUR/USD sell-off continues this morning after data showed German Factory orders slumping in March. According to the Federal Statistical Office (Destatis), the real (price-adjusted) order intake in March 2020 was 15.6% lower than in February 2020, seasonally and calendar-adjusted, the largest decrease since the beginning of the time series in January 1991.Compared to February, domestic orders fell 14.8%, international orders slumped 16.1% and orders from the Euro-Zone fell by 17.9%. 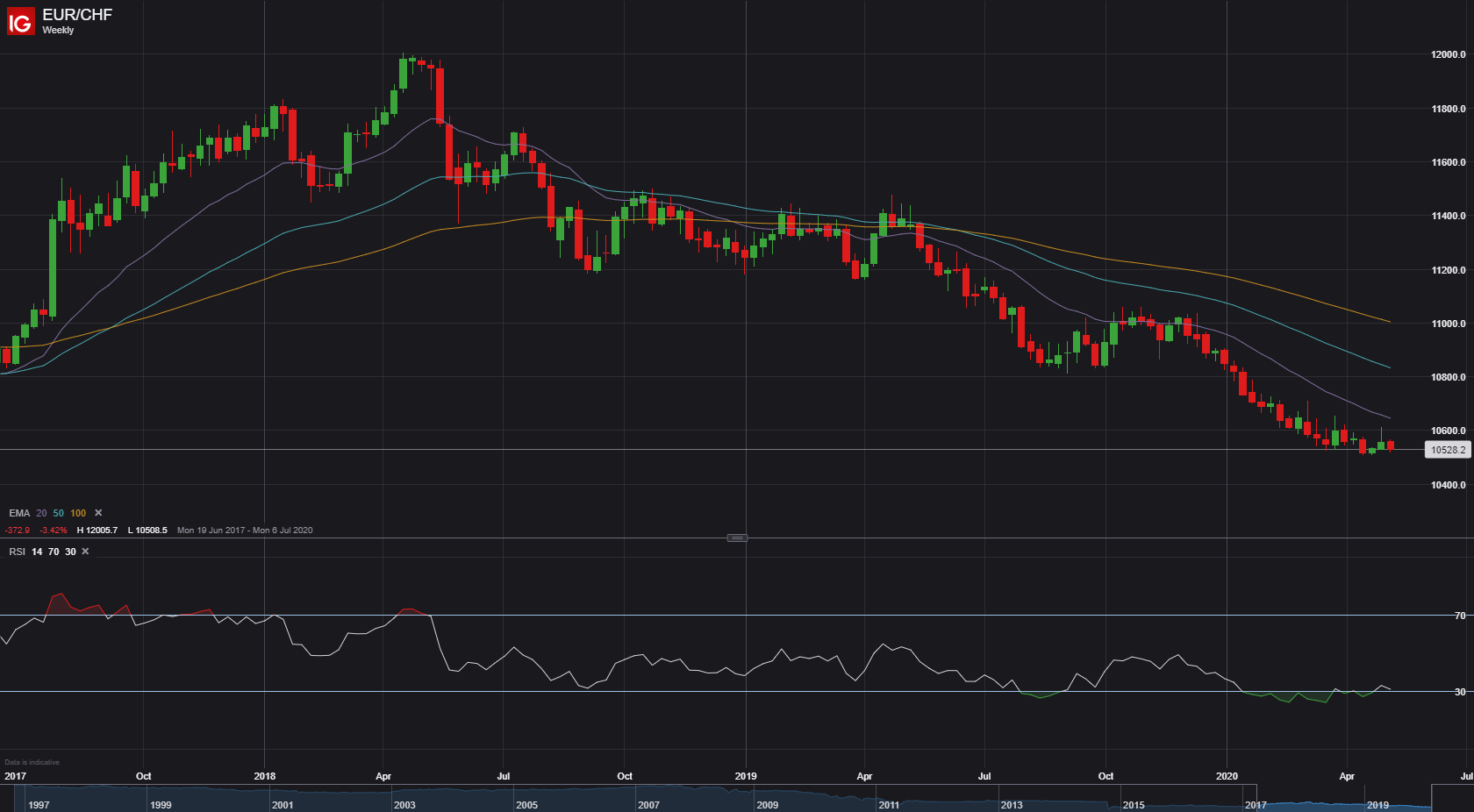 While the price has dropped this week just under the 1.1485 low touched on April 17, 2017, it has yet to do so conclusively. Moreover, hopes are rising of an easing of lockdowns that might limit the economic damage caused by Covid-19 and lift traders’ appetite for riskier assets like the Euro.
The weekly EUR/CHF chart above shows that this cross has already dropped under its 2017 lows so is more bearish. However, there is still support for it at levels around 1.1023 last seen five years ago, some three months after the “flash crash".

Will the Australian Dollar Sink?

About 48.13% of retail traders are net long the sentiment-linked Australian Dollar against the US Dollar. Those net long AUD/USD have increased by 12.63% and 12.17% over a daily and weekly basis respectively. From here, recent changes in sentiment warn that the current price trend may soon reverse lower despite the fact traders remain netshort. That could speak to a rising share of traders attempting to pick potential bottoms.
AUD/USD may be at risk to a material bearish shift in its price trend after the pair took out rising support from March – blue lines on the 4-hour chart below. Prices did bounce off former resistance-turned-support at 0.6385 – 0.6407. A descent through this area exposes what appears to be the next major area of support between 0.6250 – 0.6266. Resuming the uptrend entails closing above 0.6570.

USD/CAD Rally Looks to Be on the Horizon

Lately, USD/CAD hasn’t been a lot of fun for traders seeking a solid directional move, actually not too many currency pairs have been finding much traction. But with a little more time that could change as the backing-and-filling price action since the end of the March will eventually give way to clearer price swings.
Given the overlapping price action the downward drift smacks of a corrective move. Currently there is a good floor in place right around 13850, where two declines abruptly stopped and turned into price jumps. USD/CAD may trade back towards this support level, but as long as it holds then a low may be in place.
With the general trend off the March high tilted down there is still some risk that sellers gain the upper hand, but if they don’t then the convergence in price should lead to a breakout in the not-too-distant future. 14260 is the first hurdle to cross of significance upon a break above the March trend-line. A break above there will count as the first higher-high since the Q1 peak.
A run back to the Q1-2020/2016 highs will result in a very meaningful test as a breakout may lead to a rally back levels not seen since the early-2000s. On the flip-side, should none of the top-side thresholds mentioned above get crossed and 13850 support break with momentum, then a larger reversal may be at hand. In any event, traders will likely be best served by remaining patient for the time-being. 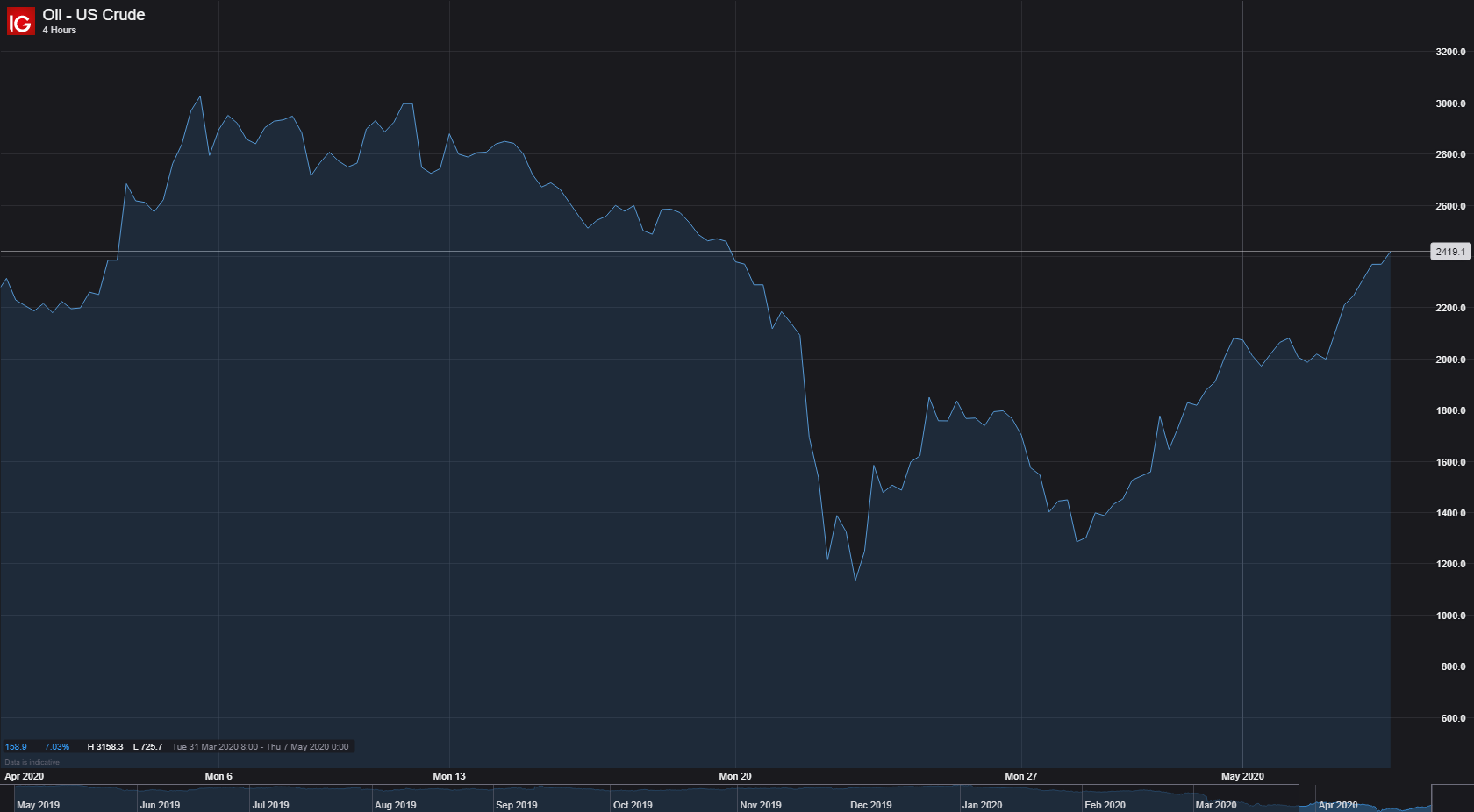 Oil prices surged on Tuesday as optimism around ongoing production cuts and a recovery in demand with the reopening of economies around the world pushed prices higher.
West Texas Intermediate, the U.S. benchmark, jumped 13%, or $2.66, to trade at $24.05 per barrel. The contract gained 3.08% on Monday — closing above $20 for the first time since mid-April — and is on pace for its fifth-straight day of gains for the first time since February. International benchmark Brent crude traded 8.5% higher at $29.72 per barrel, and is also pacing for its fifth-consecutive positive session.
Oil demand has fallen off a cliff as the coronavirus pandemic spread around the globe, forcing billions of people to remain inside and bringing air travel to a near standstill. By some estimates as much as a third of worldwide demand was erased in April.
But with economies gradually starting to reopen — a number of U.S. states, including Florida, began phase one reopening plans on Monday, while millions of Italians will return to work this week — investors believe there will be an uptick in demand.
The improving demand outlook comes as producers have scaled back production, which has also supported prices. The historic cut from OPEC and its oil-producing allies, which takes 9.7 million barrels per day offline, went into effect on May 1. Norway and Canada have also curbed production.
In the U.S., data from the Energy Information Administration showed that weekly production averaged 12.1 million bpd for the week ending April 24, roughly 1 million bpd below the all-time high levels from March.