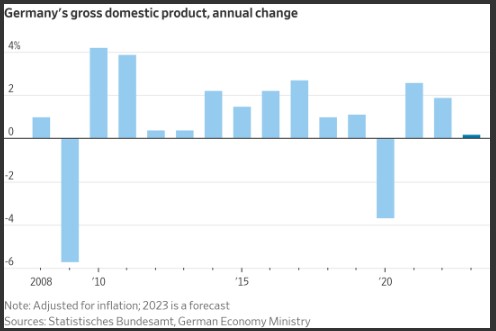 The German economy will grow this year and might even avoid a shallow recession in the short term, the government said on Wednesday, the latest sign of brightening growth prospects in Europe despite the shock of Russia’s invasion of Ukraine.

Europe’s largest economy is likely to expand by 0.2% this year, the German Economy Ministry said Wednesday in its annual economic report, revising up an autumn forecast for a 0.4% contraction.
“We aren’t through yet but we managed to avoid the worst scenarios,” German Economy Minister Robert Habeck said, recalling that some scenarios saw a possible 12% contraction in output following Russia’s attack on Ukraine and the energy crunch it caused.
Germany’s large export-oriented manufacturers have kept production steady in recent months, defying predictions of a sharp decline, and now stand to benefit from the economic reopening in China, Germany’s largest trading partner. Mounting confidence about the year ahead helped send a closely watched business sentiment index to its highest level since last summer on Wednesday.
A resurgent euro and a likely slowdown in economies such as the U.S. looks set to sap demand for the country’s exports. Industrial orders have weakened since the start of 2022. German exports to countries outside the EU declined by almost 10% in December from the previous month, according to its federal statistics agency.

Still, while a crisis may have been averted, Germany faces significant economic headwinds that suggest a lengthy period of low growth is likely.

Asset managers turn yen bullish for the first time since 2021

APP has learned that institutional investors have turned bullish on the yen for the first time since June 2021, as market speculation heats up about the Bank of Japan’s future exit from its ultra-loose monetary policy.

The latest data from the U.S. Commodity Futures Trading Commission (CFTC) showed asset managers’ net positions in the yen turned positive in the week ended Jan. 17. The news came ahead of the Bank of Japan’s latest policy meeting. At the meeting, the Bank of Japan stood by its stimulus framework, fighting off bets that a change was imminent.

The Bank of Japan released the minutes of its monetary policy meeting in December last year, showing that many members believed that it is important to continue to ease monetary policy. If necessary, we will not hesitate to step up the easing policy. Some members said the BOJ must clearly explain that widening the yield band is not aimed at exiting its ultra-loose policy.

Economists at Goldman Sachs no longer predict a euro-zone recession after the economy proved more resilient at the end of 2022, natural gas prices fell sharply and China abandoned Covid-19 restrictions earlier than anticipated.

Gross domestic product is now expected to increase 0.6% this year, compared with an earlier forecast for a contraction of 0.1%. While growth will still be weak during the winter due to the energy crisis, the first quarter of 2023 will likely see expansion of 0.1%, according to economists led by Jari Stehn. They also see inflation easing faster than thought — to about 3.25% by end-2023. 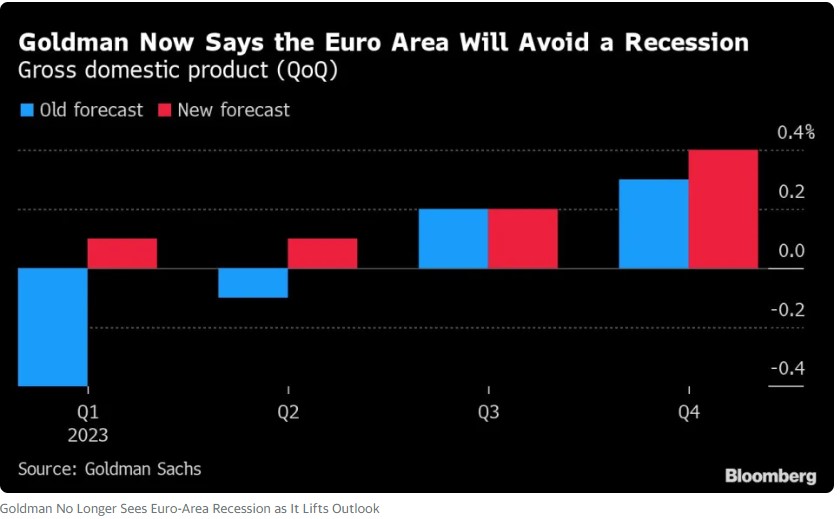 “We also look for core inflation to slow due to cooling goods prices but see continued upward pressure on services inflation due to rising labor costs,” they said. “Given more resilient activity, sticky core inflation and hawkish commentary, we expect the European Central Bank to tighten significantly more in coming months.”

Goldman reiterated its call for half-point increases in interest rates at the ECB’s February and March meetings, followed by a final quarter-point step in May to take the deposit rate to 3.25%.

“What is the best reopening play? It is oil,” Jeff Currie, the bank’s global head of commodities research said in a Bloomberg Television interview Wednesday. “What is idled? Planes, trains and automobiles. You turn them all back on, that’s going to be a big pop in oil demand.”

A barrel of Brent oil could reach $110 by the third quarter if China and other Asian economies fully reopen from coronavirus restrictions, Currie said. Futures are trading above $82 a barrel on Wednesday.

The UK recession will be almost as deep as that of Russia, economists predict

In its 2023 macro outlook, Goldman Sachs forecast a 1.2% contraction in U.K. real GDP over the course of this year, well below all other G-10 (Group of Ten) major economies. This would be followed by a 0.9% expansion in 2024.

The figure places Britain only fractionally ahead of Russia, which the bank projects will see a 1.3% contraction in 2023 as it continues to wage war in Ukraine and weather punitive economic sanctions from Western powers. This will be followed by a 1.8% expansion in 2024, Goldman figures suggest.
The U.K. independent Office for Budget Responsibility projects that the country faces its sharpest fall in living standards on record. Alongside Finance Minister Jeremy Hunt’s budget statement in November, the OBR forecast that real household disposable income  a measure of living standards  will fall by 4.3% in 2022-23.

Consultancy firm KPMG projected that the U.K. real GDP will contract by 1.3% in 2023, amid a “relatively shallow but protracted recession,” before seeing a partial 0.2% recovery in 2024.
KPMG expects the central bank to increase the bank rate to 4% during the first quarter of this year before adopting a “wait-and-see” approach, as inflation gradually eases.

“The labour market is set to start deteriorating from the first half of 2023, with the unemployment rate reaching 5.6% by mid-2024, representing an increase of around 680,000 people,” KPMG economists said in an outlook report in December.